Chapters Provide Shelter From the Storm

Chapters Provide Shelter From the Storm

In 1998, Randy Thies got a call from Sarasota County Schools asking if the Sarasota Vo-Ag FFA Chapter at Suncoast Technical College could take care of cats and dogs belonging to first responders during an upcoming hurricane.

The school had no formal disaster plan for animals back then, but Thies, the agriculture teacher and FFA advisor, agreed to provide shelter and care for 35 companion animals. It sparked a tradition of pitching in during disasters.

“When hurricanes come through, there is a huge need for volunteers to come in and help with the animals,” Thies explains. “It just continued to grow.”

Over the past two decades, Suncoast Technical College has joined a handful of other local schools to turn their campuses into makeshift shelters for animals in need, and the FFA chapter has become an integral part of the disaster response team in Sarasota, Fla. During Hurricane Irma in 2017, FFA members helped care for 1,500 animals sheltered in three county schools.

This community dedication isn’t limited to Sarasota. FFA chapters across the country are creating disaster plans to help the animals in their communities during natural disasters, ranging from hurricanes, floods and wildfires to threats to their schools. Their responses are often essential to weathering catastrophic events and rebuilding in the aftermath of a tragedy. 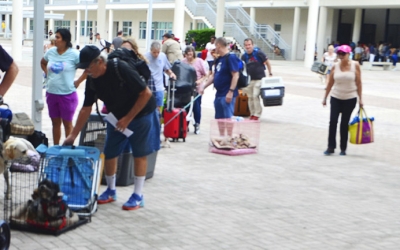 During Hurricane Irma in 2017, community members in Sarasota, Fla., brought their pets to Sarasota Vo-Ag FFA for care.

Preparing for the worst

As part of its’ disaster plan, the Sarasota Vo-Ag  FFA Chapter participates in annual trainings that involve disinfecting and setting up kennels to ensure the process is seamless in the event of a hurricane or other natural disaster.

The kennels were harder to set up than students expected, some members admit.

“When there’s a hurricane coming, it happens super fast, and it’s good to know how to do everything in advance so we can just start loading up and getting ready and automatically know what to do,” says FFA member Whitney Langdon. “We want everything to be perfect.”

Members also received training through the American Red Cross and the Florida State Animal Response Coalition, a nonprofit organization that trains volunteers to save and protect companion animals during natural and manmade disasters. The training mirrors the lessons Thies teaches in the veterinary assisting class.

“A lot of students love animals and want to go on and be veterinarians or work in animal care facilities,” Thies says. “Getting the background of helping animals and communities when a storm comes is good for them.”

Learning how to set up a shelter, properly clean and disinfect cages, recognize signs of illness and distress, and care for and feed animals prepared member Cami Golden to deal with unfamiliar and frightened animals during a hurricane or other natural disasters.

It also provided valuable insight about the career possibilities. It was “a good training opportunity to help us get a good baseline idea of what it would be like to handle animals in our careers,” she says.

In 2019, after Hurricane Dorian battered Plant City, Fla., Aniyah Betancourt, Kylie Harris, Yarel Santiago, Matthew Ayuso and other members of the Plant City FFA Chapter decided it was time to prepare for the next disaster. The chapter focused on making sure local animals were safe.

“We tend to have a lot of storms in Florida; it’s just a part of living here,” Harris says. “Hurricane season can be devastating to some of us, and a lot of people don’t stop to think that animals are also affected by this storm.”

The chapter recently received an FFA Day of Service Mini-Grant to host a disaster-relief drive to collect pet supplies. Its goal is to gather food, blankets, paper towels and other necessities to create relief kits that will be donated to two local shelters later this year, according to Cassie Miles, agriscience instructor and FFA advisor.

In 2017, after the Oroville Dam was damaged and members of the small town of Oroville, Calif., were forced to evacuate, the Gridley FFA Chapter realized it was time to create a plan for saving livestock in the event of a disaster. Its disaster plan proved invaluable when the Camp Fire, the deadliest and most destructive fire in California history, devastated local communities in 2018.

“When towns close to us started evacuating, our fairgrounds became the evacuation center for animals,” recalls agriculture teacher and FFA advisor Jenny Kaslin. “We messaged our students through Facebook and Instagram that it was time to put the disaster plan into action, and we needed help setting up panels and pens.”

Chapter president Zane Young was one of the students who drove livestock trailers into danger zones to move horses, sheep, goats, pigs and chickens to the rescue site at the fairgrounds.

Once the animals were settled at the fairgrounds, FFA members set up a feeding schedule and reached out to other chapters to take turns providing food and water to the rescued animals.

“Our plan through this was to divide the tasks. We had a group of people just unloading truckloads of donations; groups moving animals; groups setting up food and water; and groups doing first aid,” Young recalls. “It was good to have a plan in place to avoid chaos and good for people to see FFA kids coming through, to know that there is an organization that is ready to serve its community and help everyone get through a disaster. Without a plan, that wouldn’t happen.” 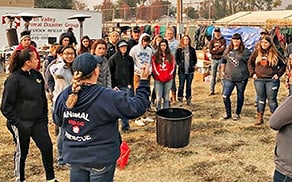 Gridley FFA members create a plan for saving livestock during the 2017 Camp Fire in California.

How to devise a disaster response plan

Preparing for a different kind of disaster

In 2016, Mission Valley High School in Eskridge, Kan., received an FFA Living to Serve Grant to create disaster kits for each of its classrooms. The run-hide-fight bags contain items that could be used if an intruder comes into the school, including a first aid kit, flashlights, duct tape and wasp spray (which has a longer spray radius than pepper spray). The FFA chapter also put together tornado kits.

“Our FFA chapter is one of the largest organizations in our school,” explains chapter officer Grace Deters. “We really felt that we needed to take initiative.”