If you don’t yet know the name Alea Ogle, you will. This 16-year-old stands poised for sweet success –most likely as a baker.

She’s already made a name for herself in Streator, Ill., her rural hometown near Peoria (about 80 miles southwest of Chicago). Folks there have followed Ogle’s trajectory, along with her pastries, for five years already.

“I started selling cinnamon rolls, blueberry scones, muffins and cookies at our farmers market when I was 12. After a while, I had a lot of regular customers and followers on social media,” she says. “When I saw customers eating my products and loving them and wanting more, that kind of got me going and really motivated me to open my own shop.”

She gives a good measure of credit to her family for introducing her to batter bowls and baking sheets at a young age. From the time she was 4 or 5 years old – while kids her age were making pretend cookies in their play kitchens – Ogle was discovering the joy of cooking in her grandmother’s kitchen.

“I was always in there with her and my great-aunt and mom; they’d let me help,” she says. “My grandma taught me a lot of baking. Most everything else I learned from watching YouTube videos or Pinterest and testing unique recipes in my own kitchen.” 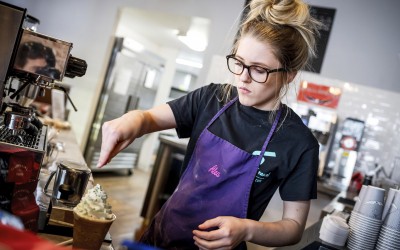 So for members of the Streator community who already knew of her locally acclaimed baked goods, it came as little surprise when Ogle opened her own store-front bakery business and coffee shop on Main Street last June.

The then 15-year-old opened the doors of her Blue Eyed Rascal Baking Co. at 6 a.m. and completely sold out of everything by 8 a.m. “I had to start baking all over again, and as soon as I’d fill the case, it would empty out in no time. It kept up like that the whole day. I finally had to close two hours early because I was all out of raw ingredients,” she says.

Now, as her bakery approaches its first anniversary, Ogle knows vastly more about managing the business and maintaining life outside the bakery. She plans for customer demands (like baking enough of her signature scones), orders supplies, hires and manages employees (one employee is her older sister, Helena) and handles other business-related activities while maintaining her junior-year classes and actively participating in the Streator Township FFA Chapter. Somehow, she even finds time to serve as the chapter reporter. But being a normal teenager and having fun remains a focused item on her to-do list.

“She’s always been a go-getter,” says her mother, Jody Ogle, who explains her role as the corporate officer and investor in the Blue Eyed Rascal Baking Co. As a former accountant, Mom also manages payroll and the books until her daughter can acquire those skills. A computer programmer at a full-time job, Jody Ogle says her daughter runs the business and is, in fact, the lead baker, owner and operator.

“In one week, Alea had someone come for the health department inspection and a fire safety inspector and one other, and they’d ask, ‘Where’s your mother?’ She had to explain she was the owner, and they needed to talk to her instead,” her mother recounts. “I stop in on Saturdays to help out with the dishes or to put cookies in the bag for customers, but that’s about it.”

Transforming the business from farmers market fare to a brick-and-mortar bakery came about quite organically. The teen’s passion for baking dovetailed with her parents’ penchant for helping revitalize Streator’s downtown. On a committee dedicated to bringing back Main Street, her parents purchased a run-down, old brick building intent on eventually renovating and perhaps renting it to an incubator business. But as luck would have it, their daughter’s small-batch baked goods had yielded a big batch of social media fans and faithful customers who wanted more than her cottage-kitchen enterprise could handle. She mused about what it would be like to open a bakery someday. Before long, she would know. 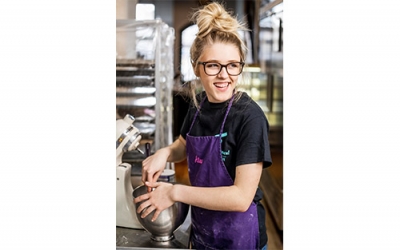 Ogle has been homeschooled since first grade, but she began taking ag courses at Streator Township High School during her freshman year. FFA advisor Riley Hintzsche recruited her into FFA after having her older sister in the program. “We had a really competitive food science team, and I knew Alea would enjoy that and be very good at it,” he says. “But once her baking expanded, she became more involved, and her record book evolved into what it is today. Then the plans for her bakery opened up, and it was like ‘Holy cow, this is monumental for someone her age to be taking on!’ It’s been really cool to watch it morph into what it is today.”

When Ogle closes the bakery at 2 p.m. Wednesday through Friday, she zips over to the high school by 2:10
p.m., having already put in a full day’s work. She attends Hintzsche’s Teach Ag Intern class, in which she student-instructs Intro to Ag to underclassmen. Ogle also continues her homeschool courses in the evening and during any downtime in the day.

Hintzsche says Ogle motivates other students and many 4-H members by showing them what it takes to run a business. She also employs two other ag students part time at her bakery. “She inspires our students, because they can see what she’s really doing at that bakery every single day and that not all days are going to be a piece of cake – literally and figuratively. Alea comes in at the end of her baking shift, and some days she looks like a hot mess,” he says. “The kids look at her and ask, ‘What did you do today?’ And she’ll tell them everything, and they just look at her in amazement. I can see she’s had a rough day, but she’s still at class, willing to be there and do the best she can.”

“I start baking around 4:30 in the morning, so I’m usually in bed by at least 9 at night,” she says. “I work and take classes, and I still have laundry and dishes and things like that I do to help out at home, but it’s all about time management. I procrastinate on some things, like my record book, and I still do plenty of fun things like any normal teenager, like going to lunch or dinner or shopping with friends, visiting my boyfriend and going to all kinds of FFA events and competitions. Last fall, I closed the bakery for a week because there was no way I was going to miss going to national convention. It’s all about balance.” 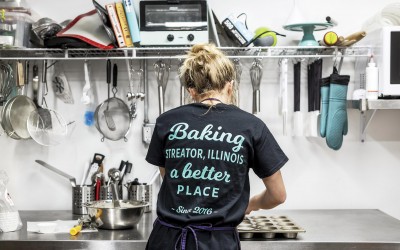 A Batch of FFA Experiences

As in any endeavor, you typically only get out what you put into FFA. Alea Ogle had done just about anything and everything in FFA, according to FFA advisor Riley Hintzsche, which might partially explain Ogle’s personal growth and career success. “It must be a common mold in her family, because she and her sister, Helena, are cut from a similar cloth,” Hintzsche says. “Alea has been involved in the ag communications career development event (CDE), ag ed CDE, the dairy foods CDE, and she was on a national food science team that placed 11th in the nation (she placed 12th individually). She is currently the chapter reporter and has her record book in ag processing. Plus, she’s the Teach Ag intern, assisting me with instructing the class several days a week.”

Hintzsche tells students that in order to achieve their goals, it often comes down to knowing they can do anything with the right resources and the right connections. “What I find fascinating about Alea is that we all have moments when we are unsure of ourselves, but she’s able to find those who love and support her, and she is able to push through those times of self-doubt. That inspires our students. And she is very willing to always learn something new.”

Step 1: Add 1 cup of Commitment. Commit to your business once you start. Don’t give up on your dream because you can make it happen.

Step 2: Sprinkle in Persistence. Find the strength to keep up your journal entries — update that book no matter how many punches life may swing at you. Just roll with it. Repeat this step in your business.

Step 3: Set Goals to set yourself up for success. Make plans for the next month, year and so on. This will help you when we get to

Step 5. Mix up your goals—make plenty of them.

Step 4: Put this concoction in the oven. Bake at 350 degrees for several hours. While you’re waiting, take a walk or meet up with some friends for lunch. Make time for you! You deserve it. After all, you are an entrepreneur.

Step 5: Take it out of the oven and lay out all your ingredients to frost. Organize everything you’ll need, so you won’t have to make multiple trips.

Step 7: Do not forget this step! Whisk in respect and honesty. You can’t own a successful business if you aren’t honest with your customers and workers — things just don’t work out. Be fair, trustworthy and have respect for everyone around you. You wouldn’t be who you are today
without the support system standing behind you.